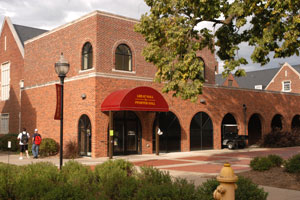 Pfeiffer Dining Hall and the Great Hall were built in 1954 and dedicated in 1955. Named after Gustavus Adolfus Pfeiffer, this building was created to house the dining center for the campus as well as a multi-purpose room and was initially referred to as a student union. The cost of building this two-story student union was approximately $265,000. By the 1970s, Pfeiffer’s facilities were considered inadequate by many students and the culinary team was unable to keep up with the rising enrollment numbers. As a result, during the Summer of 1973 Pfeiffer went through a full renovation in an effort to modernize and expand to the existing dining hall. The renovation included a remodeling of the kitchens, bathrooms and tripled the coatroom. Food Preparation expanded to 450 sq. ft. and new entrances were added in the Southwest corner of the building. The renovation also reworked service patterns to avoid congestion and fixed a huge complaint of students which was the lack of hot food available during dining hours. The total cost for the renovation was around $400,000. What was notably left out of the renovation was an increase in the seating capacity, which meant that lines still would extend outside of the building on occasion. Pfeiffer went through another full renovation in 2001, again to modernize, finally expand seating for the students, and bring the building to where it is today.

Above Pfeiffer, Great Hall was also a very popular place around campus. This room served as a student lounge for dances, convocations, lectures, recitals, concerts, and banquets. Off the south side, there was also a sun deck that directly overtops the Pfeiffer kitchen. On October 18, 1975, a fire broke out which engulfed the building in flames. It is theorized that the cause of the fire was a cigarette that was left on a couch during a dance held the night before. Around 12:30 am, students claimed to smell smoke, but a search for a fire turned up nothing. The next day food service employees first noticed a reflection of flames through the Kresge windows. The total cost for the damages was around $200,000. Of the items destroyed in the fire were a grand piano and $40,000 worth of furniture. It took until February 1976 for plans of a full remodel to be completed. The architects wanted to ensure that the room still had a raw wood interior, and therefore they needed to sandblast some of the burnt timber in the room. It was during this renovation that a spiral staircase was added to the building to bring it up to building codes of the day.