The Simpson College Board of Trustees at its May meeting appointed Terry Handley ’09 as board chair and welcomed newly-elected members Beth Nigut ’91 and Joe Sorenson ’12 to the College’s governing body.

Handley follows the tenure of Terry Lillis ’77, board chair since 2017.

“We are excited for the leadership Terry Handley will provide and sincerely thank Terry Lillis for his service as board chair,” said Simpson College President Marsha Kelliher. “Our two new members make excellent additions to the Board. I’m confident they will work with their fellow Trustees to continue the long history of visionary board leadership for the long-term success of the College.” 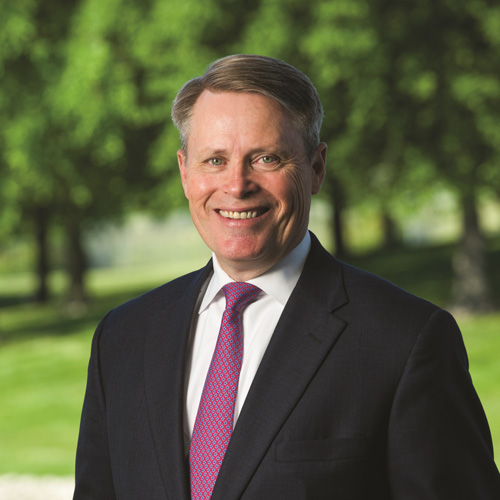 Handley brings decades of leadership experience to his role. He retired as president and CEO of Casey’s General Stores, Inc. in 2019, closing a career that spanned almost 40 years. Handley started with the convenience store giant in 1981 and became president and CEO in 2016. A 2009 graduate of Simpson’s continuing, graduate and online program, Handley joined the Board of Trustees in 2015.

The newest members of the Board, Nigut and Sorenson began their inaugural three-year terms at the May 14 meeting.

Nigut is the executive vice president and chief people officer at EMC Insurance Companies. A political science major at Simpson, Nigut earned 2020 Human Resources Professional of the Year honors from the Des Moines Business Record. She graduated from Drake University Law School in 1994 before beginning her career at Bradshaw, Fowler, Proctor & Fairgrave, P.C.

Sorenson is vice president of affiliate relations at the Community Foundation of Greater Des Moines. A liberal arts, economics: finance and applied philosophy major at Simpson, Sorenson was named to the Des Moines Business Record’s Forty Under 40 list in 2018. The former student body president earned his Chartered Advisor in Philanthropy® designation from The American College in 2015. Sorenson has been with the Community Foundation of Greater Des Moines since 2012.

To view all the members of Simpson's Board of Trustees, click here.

About Simpson College
Simpson College is a private, liberal arts college located in Iowa with campuses in Indianola, West Des Moines and online. Founded in 1860, the college has 1,268 undergraduate and graduate students. Simpson offers 74 majors, minors and programs in addition to three graduate programs. Outside of the classroom, Simpson is a member of the NCAA Division III American Rivers Conference, hosts eight Greek houses on campus and sponsors many extracurricular options for student involvement.