We want those who serve to know they certainly have a place of honor at our table.

Simpson College supports veterans in a variety of ways.

One way is by holding an annual Veteran’s Day ceremony, which took place Nov. 7 in Smith Chapel. About a dozen American Legion members joined members of the Simpson community. 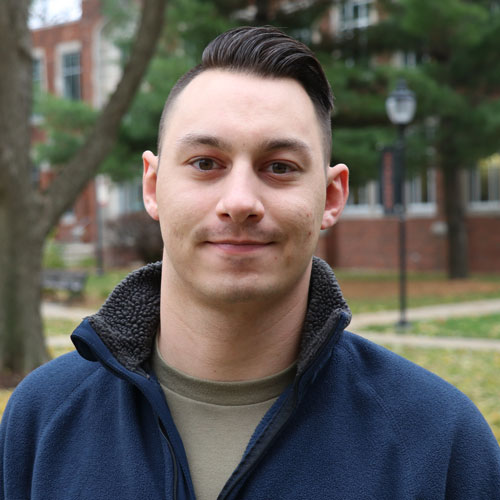 The other is by doing everything possible to assist veterans and Iowa National Guard soldiers like Supply Sgt. Jacob Labate, who will graduate from Simpson with a degree in political science in December. We’ll return to his story later.

This year’s Veteran’s Day ceremony contained a change of pace. In the five years or so since the event began, the guest speaker has usually been an active or retired solider or Marine.

Denise Lutsky is neither, but she serves her country, too.

She is the wife of Steve Lutsky, Inspector General of the XVIII Airborne Corps, who has 31 years of service in the U.S. Army. The couple and their two children have moved to 10 different military bases in 23 years, including one in Germany.

Steve Lutsky has served nine overseas deployments. In August, he deployed to Iraq, where he will remain until August 2019.

For his wife and children, that means another year of being separated during Christmas, anniversaries and birthdays.

“It’s not a fair statement to say you get used to it,” his wife said. “Because honestly, you never get used to missing the person you want there the most.”

The sister of Jackie Brittingham, professor of Biology at Simpson, Denise now lives in North Carolina. The same week her husband deployed, the oldest of her two children started college, nine hours away from home.

“That was a tough week,” she said.

She talked often about the extended family she has developed – some are blood relatives, some are military families and some are next-door neighbors. In addition to working as a personal trainer and group fitness instructor, she helps assist Army family support groups.

She knows how life is different for a military family – how a strange phone call can make the heart race; how difficult it is to help children adjust to new teachers and coaches; and how emotional it can be to visit Arlington National Ceremony.

For her, it isn’t a tourist stop. It’s where some of her friends are buried.

She urged – “challenged” – everyone attending the event to reach out to a military family or veteran, to become part of their extended family.

Offer to attach the Christmas lights. Volunteer to shovel the walk or mow the lawn. Invite someone over for game night, or book club or Bible study.

“You can help make their sacrifices on behalf of our country more bearable,” she said. “And in return you’ll be doing a small part to help our veterans.”

At Simpson, about 25 veterans who receive VA Education Benefits attend the College, as well as 12 dependents of veterans.

“We want those who serve to know they certainly have a place of honor at our table,” said Kent Eaton, senior vice president and academic dean.

Jacob Labate has experienced that support.

“The professors have been very helpful,” he said. “I don’t think I’ve ever had a professor that didn’t bend over backwards for me.”

Labate, who grew up in Jefferson, joined the Iowa National Guard when he was 17. He said he was influenced by his mother, Barbara, who had been an active member in the U.S. Navy. She served in Bermuda and San Diego.

After two years at Des Moines Area Community College, he transferred to Simpson to complete his political science degree. In the meantime, he also worked full-time for the Guard in logistics. He plans to make military service his career.

“The liberal arts side of Simpson College has really helped me develop a lot of the other stuff for my position,” he said. “One of the best things I took away from Simpson is the ability to write.”

Labate said his degree could accelerate his path toward becoming a warrant officer, should he pursue that in the future.

When he thinks of Veteran’s Day, Labate returns to his mother. “She didn’t talk a lot about her military experience, but you could tell she was a veteran by the type of person she exemplified,” he said.

Denise Lutsky will be thinking of her husband and all of the many veterans she has known.

As the Simpson ceremony ended, she walked over and shook the hand of every American Legion member, thanking each one.

She may not have a title, but she, too, is a soldier.