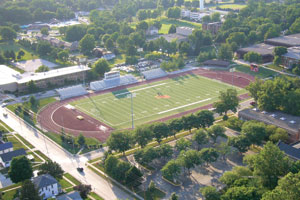 In 1998 the Simpson College football stadium was named Buxton Stadium in honor of William Buxton. The Buxton family had four generations of Simpson board members and have long resided in Warren County as financiers and farmers. They donated the land for Buxton Park, and have given money towards various projects on campus. Buxton Stadium has been in the same area since the 1950s but has received many renovations over the year, with many of these renovations taking place in 2010. The stadium hosts school-sponsored sports like football, soccer, and track. It is also home, however, to intramural competitions for Simpson students. The football field is located just south of the Kent Center and Cowles gymnasium.

Buxton Field was one of the first fields in Iowa to upgrade to synthetic grass in 2001. In 2011, it was upgraded to a more state-of-the-art turf. The turf is managed and receives upkeep on a regular basis to keep it the best in the American Rivers Conference. It is also used as a practice field for fall sports like soccer and football. Occasionally Indianola Public Schools utilize the field or track for sporting events and activities. The multipurpose field is one of Simpson’s best additions to the collegiate experience.

An eight-lane track surrounds the football field, which was updated in 2011 by the company Beynon that also poured the University of Iowa’s track in the previous year. The track is a full-pour ten-millimeter surface. The track and cross-country teams utilize the track during their respective seasons. Buxton Stadium is the home of the Kip Janvrin Open, one of the largest outdoor track meets in the Midwest, boasting all NCAA divisions. The meet was renamed in 2006 in honor of the Olympic Decathlete, who graduated from Simpson in 1988.

The outside of the stadium was improved in 2010. There are two entrances composed of brick ticket booths and iron fencing surrounding the entirety of the stadium.  At the south entrance, there is an arch that has the Simpson College logo engraved.