Above: Picture are the competing teams and Scholars preparing for the Iowa History Center Trivia event on February 19, 2019.

In keeping true to the tradition of the Iowa History Center Scholars putting on a trivia event, for 2019 we hosted a kahoot based trivia game. Teams of up to four competed answering a variety of questions created primarily by the scholars including categories such as Iowa history, Iowa popular culture and name this Iowa picture. The winning three teams each received varying amounts of money to spend on Amazon.

The Iowa History Center Scholars held three Iowa Jeopardy contests through 2018, dating back to February 16, 2016. The teams that participated in the contests consisted of three or four Simpson students who study a variety of disciplines at the college. The participants were quizzed over a broad range of Iowa history facts that our Iowa History Center Distinguished Scholars compiled. The contests were comprised of many categories, including subjects such as Iowa Pop Culture, Movies in Iowa, Notable Names, and Politics. At the end of the game the scores were compiled and each member of the first place team received a $50 Amazon Shopping Spree, each member of the second place team received a $25 Amazon Shopping Spree, and each member of the third place team received a $10 Amazon Shopping Spree.

Above: During the event (2016) teams used a buzzer to buzz in their answer after the question was read. In traditional Jeopardy style, the first team that buzzed in would then answer in question form. 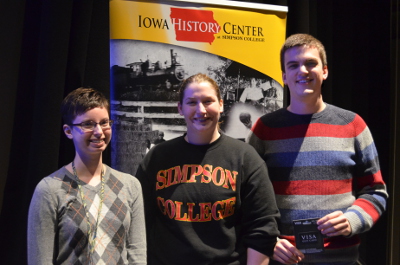 We held our first annual Iowa IQ contest on February 17, 2015. The contest was comprised of categories including the subjects of the Iowa State Fair, Education in Iowa, Famous Iowans, and Agriculture. In the months leading up the contest, Iowa fun facts were posted on our social media pages, so that the contestants could prepare for the contest. It was clear that the teams utilized this resource because all participants were prepared and knew most of the answers to the questions, making the contest a competitive and exciting event. At the end of the game, each member of the first place team received a $25 Visa gift card and each member of the second place team received a $10 gift card to Holy Grounds Coffee Shop.

During the event teams raised a flag after the question was read and the IHC Scholars decided who had their flag raised first. In traditional Jeopardy style, the fastest team then answered in question form. 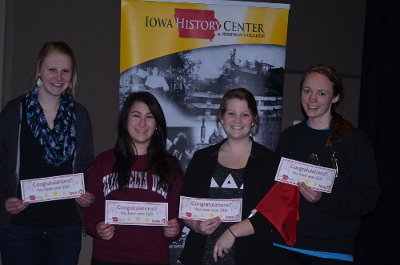