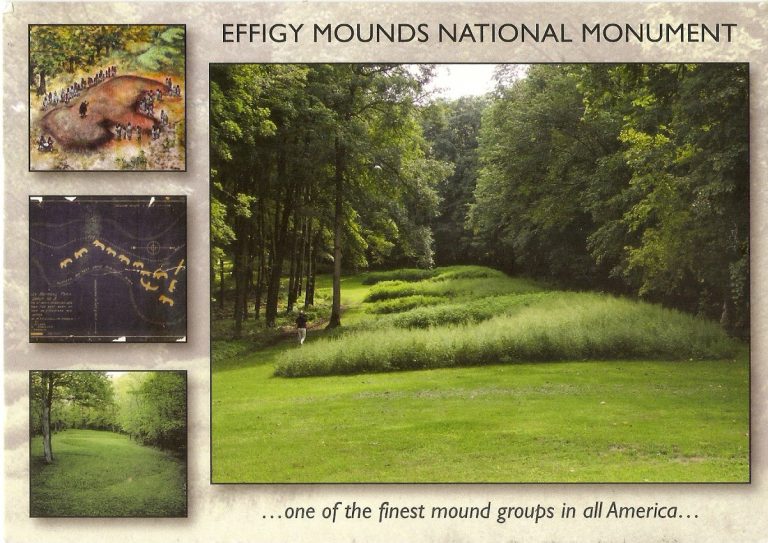 The Effigy Mounds National Monument is located in northeast Iowa along the Mississippi River in a small town called Harpers Ferry, which is four miles north of Marquette.  This monument, visited by approximately 95,000 people a year, preserves 206 prehistoric mounds built by Native Americans during the Late Woodland Period (600 AD and 1300 AD).

The Native Americans who built these sites belonged to a distinct culture known as the Effigy Mound Builders.  Archaeologists believe the Effigy Mound communities were egalitarian.  This is supported by the lack of evidence of long-distance trade or indicators of rank or status.  Even burial sites do not display typical signs of a hierarchical society through differential burial possessions.  In most cases, no grave goods were found at all.

Despite the national monument being located in Iowa, its culture extended a much larger range.  Evidence of mounds can be found in southwest Minnesota, across southern Wisconsin from the Mississippi River to Lake Michigan, and along the border between Wisconsin and Illinois.  Dubuque, Clayton, and Allamakee counties contain the majority of the effigy mounds in Iowa.

Native Americans constructed many distinct earthen mounds.  Some effigies resemble animals while others are more abstract.  The most common shapes include: birds, bear, deer, bison, lynx, turtle, panther, or water spirits.  Certain locations feature some animal shapes more than others.  Along northeast Iowa and southwest Wisconsin, the bear and the bird are the most common effigy.  In contrast, the mounds near Lake Michigan feature turtle and panther shapes more often.  In the park, 31 of the mounds depict birds or bears.

Archaeologists have not drawn a definite conclusion on the purpose of the mounds; however, they hold several theories.  Most agree the mounds may have been used for ceremonial purposes.  Some archaeologists argue the effigy mounds could have represented spirits of the earth, sky, and water which creates an image of the Late Woodland universe.  Building the mounds together acted as a way to tether the social and religious binds of the community. Another popular theory is that the mounds might have served as burial sites. Others assert they could act as territorial markers.  The shape of the effigies may play a role in the significance of the mounds.  Several archaeologists believe effigies resembling eagles and bears acted as totems of animal spirits and natives used them as territorial markers.

Scholars may not be entirely certain about the purpose of the Effigy Mounds, but they represent the diversity and uniqueness of Iowa’s history.  Many people think Iowa’s past centers on agriculture and politics, and while these topics do play a key role in Iowa’s identity, it would be a mistake to ignore other aspects in Iowa’s story.

Effigy Mounds National Monument Quarter will be available to the public on February 7, 2017.  Read about why the Effigy Mounds was chosen to be part of the U.S. Mint America the Beautiful Quarters Program. http://www.thegazette.com/subject/news/government/Effigy-Mounds-quarter-to-be-unveiled-next-month.