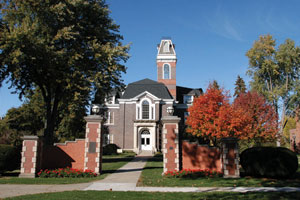 College Hall is perhaps one of the most well-known buildings on the Simpson campus. Located in the middle of the campus, the building sees a lot of foot traffic, as well as being a key part of the college’s storied history. College Hall is currently the longest-standing building on campus. The construction of the building was completed in 1870, ten years after the opening of the campus and has remained a vital part of the campus since then. Upon its establishment, it was used for nearly everything. It held classrooms and functioned as the school’s chapel.

The building's most recent major remodel took place in the late 1900s and was finished in 1986. Currently, it houses a variety of different purposes. College Hall is home to the Admissions Department and is the first building that potential future students get to see on their campus tour. The building is also home to numerous rooms for events including the Red and Gold room and the Matthew Simpson room, named after the Founder of the college. The building is also home to the Office of Financial Assistance, where students can go if they need help with any payment or billing.

One of the more fun traditions the building hosts is for incoming freshmen during their first few days on campus. To mark the start of their journey through Simpson, the new class sits in front of College hall next to the official seal of the college and listens to speakers describing what their time at Simpson will be like. The end of this ceremony is marked by all of the students passing through the gateway in front of the building, symbolizing the start of their journey as students. On the other hand, the building houses some scary stories as well. One of the most well-known is the story of the death of Millie. Millie was a girl who attended the college in its early years. The story says that she was on the top floor of the building and tripped over the end of her long dress. This resulted in her falling three stories to her untimely death. Many students and workers say that Millie’s presence can still be felt in the building today. College Hall holds a pivotal spot in Simpson’s history.