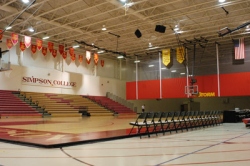 The Carse building is the main athletic building of Simpson College. Carse houses Cowles Fieldhouse, Steven Johnson Fitness Center, and Hopper Gym. The Carse building has gone through a lot of changes as it has been remodeled and updated to stay up to date with the wants and needs of the Simpson College community. The Carse building used to house a six-lane swimming pool until it was remodeled into the weight, fitness, and wrestling rooms, two racquetball courts, and a dance studio. These new rooms are used by students, faculty, alumni, and people of the Indianola community. The building was also remodeled to house classrooms, conference rooms, offices for athletic staff, health, and exercise science professors. Classes typically taught are health and exercise science courses, and sports teams also utilize the classrooms to watch films and discuss games.

Cowles Fieldhouse, housed in the lower part of the athletic building, is the main gym for indoor sporting events like volleyball and basketball along with Simpson College’s variety of intramurals. Cowles Fieldhouse was renovated in 1998 when an indoor running facility was installed that has the capacity to fit up to three thousand people. Major events happen in Cowles Fieldhouse such as graduation and “Yell Like Hell,” which is one of Simpson’s homecoming traditions. A wooden floor was installed over the linoleum flooring in 2012 for athletic practices and events. Simpson College’s basketball and volleyball teams use the wooden floor during their seasons. Other Simpson College sports like baseball, softball, and track use the gym to train during their off-seasons. People can watch videos on the LED video display board that was added to the building in 2013. People in the hallways of Carse can watch the athletic events on benches due to the windows that look down into the Cowles Fieldhouse. Carse and Cowles Fieldhouse are vital parts that house the heart and soul of Simpson College’s athletic and fitness facilities which bring the Simpson community together to cheer on the Simpson Storm.