Our Speakers Series offers programs on varied topics of Iowa history and culture. Speakers include authors, scholars, journalists, politicians, and public figures. These events, which are free and open to the general public, are held in Indianola, Des Moines, and West Des Moines. 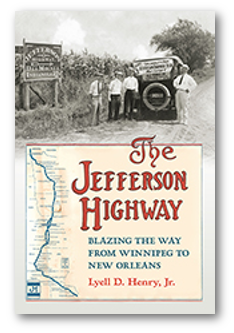 Author Lyell Henry discussed his book, The Jefferson Highway: Blazing the Way from Winnipeg to New Orleans, which tells the story of the first north-south transcontinental highway crossing the United States through the Mississippi Valley (and running right through the middle of Iowa including Des Moines and Indianola).  Largely the idea of Iowa publisher E. T. Meredith, the highway opened in 1916.

Glen Jeansonne, professor emeritus at the University of Wisconsin-Milwaukee and an award-winning historian, discussed his new book, Herbert Hoover: A Life.  The book challenges conventional wisdom about Hoover and offers a new portrait of Hoover as a dynamic progressive president who deserves a better reputation. 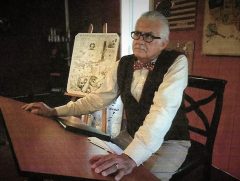 “The Art of Conservation: A Visit With Ding Darling”—Tom Milligan

Actor Tom Milligan, who brought us one-man shows on both Henry Wallace and Grant Wood, returned to Simpson as J. N. “Ding” Darling, the two-time Pulitzer Prize-winning cartoonist at the Des Moines Register and a nationally known conservationist. 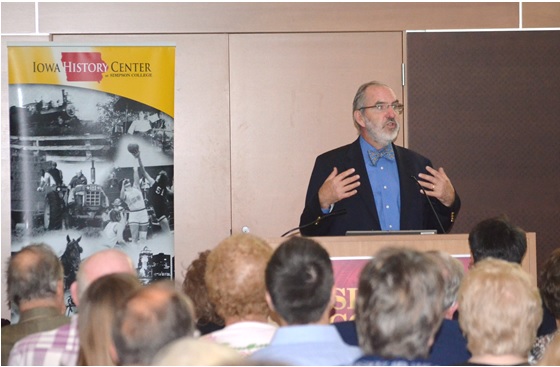 September 2016, our Speaker Series hosted map expert and Antiques Roadshow appraiser Christopher Lane. Lane discussed antique map collecting in general, and then focused on Iowa and Midwestern maps, telling the story of Iowa history through maps in our former exhibit, “Iowa and the Midwest: An Exhibition of Antique Maps.” Nearly 200 people attended the lecture. If you missed the program, it can be viewed on our YouTube channel by clicking here.

The map exhibit featured twenty-two rare and historic maps dating from 1715 to 1902. It was made possible through the generosity of Simpson alumnus, Sam O’Brien ’76, and Jim Hubbell, David Yepsen, and Bruce Kelley, who loaned us maps from their private collections.

The Midwest and Its Meaning 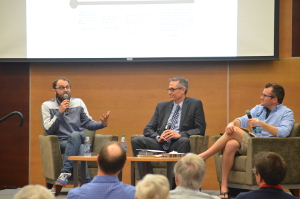 The Iowa History Center was excited to host Raygun owner Mike Draper and the "Iowa Nice Guy" Scott Siepker on Tuesday evening, March 22, 7 p.m., Kent Campus Center, Simpson College. With the help of moderator Jay Byers, a Simpson alumunus and CEO of the Greater Des Moines Partnership, the panel discussed whether or not the Midwest is a distinct region, and if so, what were its characteristics. This event was fun and had interesting dialogue about what makes Iowa and the Midwest significant, from the unique perspectives of two prominent figures in Iowa pop culture.

Equal Before the Law
How Iowa Led Americans to Marriage Equality

The Iowa History Center was happy to host former Des Moines Register journalists and authors Tom Witosky and Marc Hansen. Witosky and Hansen discussed their book, Equal Before the Law: How Iowa Led Americans to Marriage Equality, which covers the passage of Iowa’s Defense of Marriage Act, explores the Iowa Supreme Court Varnum v. Brien decision, and explains how the court’s decision impacted Iowa and the nation. The book is in our Iowa and the Midwest Experience Book Series. The event was moderated by Michael Gartner, who is a former editor and president of the Des Moines Register, Pulitzer Prize winner, and current co-owner and chairman of the Iowa Cubs, and offered an interesting perspective on our recent past.

The Forgotten Depression
1921: The Crash that Cured Itself

The well-known financial analyst and author James Grant came to Simpson to discuss his new book, The Forgotten Depression 1921: The Crash that Cured Itself. Grant argued that the depression in 1921 was short-lived because the federal government did not get involved. He then suggested that government involvement in the 2008 recession may have worsened the situation.

The Iowa State Fair came to Simpson College a few months early! In March, we hosted a panel of three speakers who discussed the history and the importance of the Iowa State Fair. Photographer Kurt Ullrich, Iowa State University Professor of Architecture, Thomas Leslie, and Chris Rasmussen, a historian at Fairleigh Dickinson College, all shared fascinating perspectives about the fair and its place in Iowa history. The three speakers emphasized the everlasting debate on whether the primary focus of the fair should be on agriculture or on entertainment, and they referred to how attitudes have changed over the years. Despite opposing beliefs on the purpose of the Iowa State Fair, there is no debate that the fair plays a significant role in Iowan culture that all can enjoy.

American Nations:
A History of the Eleven Rival Regional Cultures of North America 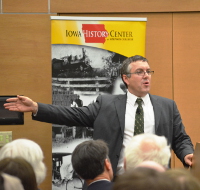 There's never been one America, Colin Woodard argues in this award-winning book, but rather several Americas, each with its own, centuries-old ideals, values, and religious and cultural heritage. Understanding the real map of the continent and its rival cultures is essential to grasping our history, from the divisions of the American Revolution and Civil War to the "blue county / red county" maps of past and recent elections.

This program made possible in part through the generous support of Humanities Iowa, the James W. Hubbell Jr. and Helen H. Hubbell Foundation and the Wonder of Words Festival
Joseph Weber on Transcendental Meditation and Fairfield, Iowa 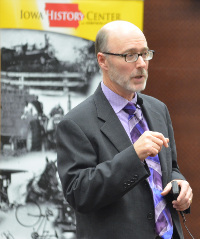 How a New Age Movement Remade a Small Town in Iowa, journalist Joseph Weber examined the impact of Indian spiritual leader Maharishi Mahesh Yogi’s decision to make tiny Fairfield, Iowa, the American center of the alternative religion. Weber described the group’s 1970s move to Iowa and examined its influence on the town’s economy, politics, culture, and architecture. He concluded by wondering about Transcendental Mediation’s future and what that future may mean for Fairfield and its residents.