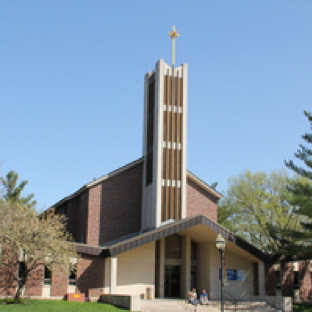 The Smith Chapel is the focal point for all religious activities on Simpson College’s campus. Smith Chapel offers a symbolic reminder of the importance of religion and spiritual experience. The Smith Chapel supports the mission of Simpson College as a church-related institute of higher education that values individuality within a creative and diverse community. The idea of Smith Chapel started in the early days of Dr. Kersetter’s time as president in 1953. Although the Methodist church was a few blocks away, Kresetter wanted something that was located on the college campus. Up until this point, students were required to attend chapel several days a week. Chapel services were held at the Methodist church or second floor of College Hall.

Kresetter found donors for the project, Alida and David O. Smith. The Smiths insisted that the chapel be built according to their plans. Richard Neutra was the architect originally assigned. Neutra’s initial sketches displeased the Smiths because they were too modern and bold. The Smith’s wanted a traditional church architecture. Neutra was removed from the project in 1960 and Arland Dirlam came on. He made traditional plans, but the Smiths were still not satisfied. Their demands were unreasonable and too expensive. The Smith Chapel became a low priority by 1963 and there was resistance to the construction on campus. There was another donor, Robert A. MacBain, who left Simpson $425,000 at his death. Around $300,000 of his legacy was contributed to the chapel, alongside the Smiths $250,000. The Smiths finally conceded and compromised on plans; construction thus began. The dedication of the Smith Memorial Chapel marked the culmination of one of the longest building projects in the history of the college. After years, David O. Smith and his sister Alida Smith were finally able to dedicate the chapel in memory of their parents, Mrs. Annie Catherine Smith and Henry Gardner Smith.

Smith Chapel was built facing west into the campus, toward Hillman Hall and backing up to Buxton street. The chapel was dedicated on Sunday, October 27, 1968, by Bishop James Thomas Jr. of the United Methodist Church, Rabbi Goldberg representing the Jewish community, and Bishop Morris Dingman representing the Catholic community. The Smith Chapel has dark exterior brick, modern stained-glass windows, and an 80-foot tower. The tower bell has an electronically amplified carillon with 150 tuned Flemish bells. The north chapel window contains many religious elements: the star and crescent of Islam, lotus of Hinduism and Buddhism, Yin and Yang of Shintoism, and totem animals of primitive religions. The chapel can seat 470 people, including 50 seats on the balcony. The chapel contains a mobile pipe organ, one of seven in the world, that can be played through the carillon in the bell tower and provide music for the entire campus. Smith Chapel allows everyone to practice their beliefs. It is Methodist-related, yet non-sectarian in spirit and program. The Smith Chapel is used for campus worship, Madrigal Choir concerts, and Honors Convocation among other events. The Dirlam Lounge is used for small-group discussions and meetings. It also holds Holy Grounds, the campus coffee shop. Smith Chapel is also equipped with several classrooms and a music lab on the lower level.