In July of 1881, Kate Shelley selflessly risked her life to protect the lives of others. Her acts of courage made Boone, Iowa a household name during that summer, and it all started one day with a never-ending rainfall. During the late nineteenth century, Boone was a growing town with a large railroad industry. Shelley’s house was right on the edge of Honey Creek near one of the many tracks crossing through the town. At this time, Shelley was only seventeen years old, but little did she know her one decision would make such an impact.

Early July received large amounts of rain with only a few dry days. On the 6th, rain was falling nonstop. The Honey Creek water level continued to rise, and by nightfall it was flowing rapidly. Train No. 12 was travelling through Boone and across the Honey Creek Bridge above the violent water flow. The four men on the train did not know that Honey Creek Bridge had been washed out. Train No. 12 was forcefully taken by the rapids. Only two of the men were lucky enough to grab onto a tree to avoid being taken by the current; the other men were not as fortunate and they were swept away by the fatal current.

Shelley heard the crash of the train from her house and knew Train No. 12 would not be the last train to attempt crossing the Honey Creek Bridge that stormy night. She knew she had to take action right away. Wearing her father’s coat, Shelley made the bold decision to crawl across the Des Moines River Bridge to the nearest telegraph station. She quickly informed the train workers that Honey Creek Bridge was absolutely destroyed.

The challenges of crossing the bridge were dangerous; the bridge had been modified to have panels of the floor taken out to discourage trespassers from walking on it. Shelley crawled across the bridge in darkness, only led by the flashes of lighting from the severe storm. When she finally reached the far side, she ran to the telegraph station and told them the news of the Honey Creek Bridge. Soon after she gave them the news, she fainted due to the exertion of her journey. Shelley was bed ridden for three months due to her act of generosity. Without her knowledge, her story was receiving international attention. The world was in awe of the strength and bravery she displayed in dangerous circumstances to save men she never even knew.

She was gifted hundreds of dollars from many beneficiaries to help with her medical payments.  In fact, Simpson College offered her $25 to come and receive a higher education. The president of the college, at the time, raised additional funds to help Shelley find her success at Simpson. After only a year, Shelley left Simpson to return home where she became a “post station agent” at the same station she crawled on the night that the bridge was destroyed. 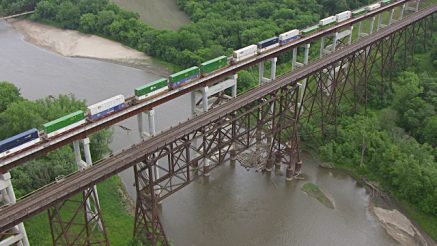 Kate Shelley was only a teenager, dressed in an old coat, crawling her way through a downpour of rain to save a group of men. Shelley proved no one is too small or too young to make an impact. In 1901 the Kate Shelley High Bridge was completed.  It is 185 feet above the Des Moines River and is about a half mile long.